MAY THESE BROTHERS
AND SISTERS
NEVER BE FORGOTTEN

“When a Marine in Vietnam is wounded, surrounded, hungry, low on ammunition or water, he looks to the sky. He knows the choppers are coming…"

During the Vietnam War from 1962 to 1975, helicopter crews were able to locate their fellow Marines on the ground by asking them to “pop a smoke" in the landing zone. The brightly colored smoke grenade identified the ground unit location, and provided landing zone wind information to the pilot. The primary Mission of our Association is to maintain the camaraderie of the Marine combat helicopter/Tiltrotor flight crews and support personnel who served together. Those direct support personnel importantly include Corpsmen and Flight Surgeons. Our biannual reunion offers all our members an opportunity to renew, in person, the bonds formed with squadron mates and other Marines with whom they served or supported in combat. The “POP A SMOKE" in our logo signifies a location to muster or an “LZ" where these great reunions are held.

The Association, originally known as the USMC/Vietnam Helicopter Pilot & Aircrew Association, is now known as the USMC/Combat Helicopter & Tiltrotor Association with REGULAR or ASSOCIATE MEMBERSHIPs available. The Associations name has evolved through the years to accommodate changes in Marine Aviation squadron designations. Although the Association’s name has had changed numerous times, the mission statement has remained the same – “This Corporation shall preserve and promote the camaraderie of those U.S. Marine Corps Pilots, air-crewmen and associated support personnel who were associated with Marine Helicopters & Tilt Rotor Aircraft”. Through our organization's newsletter “POPASMOKE", and the popasmoke.com website, we are establishing and maintaining contact with all former and current Marine helicopter/Tiltrotor crews, including pilots, crew-chiefs, gunners, air observers, maintenance, corpsmen (USN), flight surgeons (USN), chaplains (USN) and all other support personnel.

Every two years (during even years), we get together in a different region of the country to have a reunion. Our numbers are growing, with 5700+ current and former members. We're glad you found us. Feel free to join us, or just stop in at www.popasmoke.com often to “check things out".

REGULAR MEMBERSHIP is available for all those who have served in or supported a Marine helicopter or tilt-rotor squadron.

An ASSOCIATE ANNUAL MEMBERSHIP is available for those not directly qualified as REGULAR MEMBERS, but who have an interest in Marine helicopter/tilt-rotor operations. This entitles the holder to all the rights and privileges of a full member as long as the dues are paid annually.

There is a LIFER DUES program available for REGULAR and ASSOCIATE MEMBERS.

Scholarship donations can be made with annual membership renewals or sent separately to either the POPASMOKE National Headquarters or Admin office- addresses below. Mark donations for Scholarship Fund.

Semper Fi,
The Board of Directors,
USMC/Combat Helicopter & Tiltrotor Association 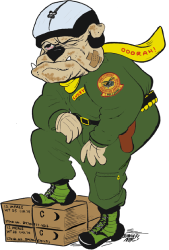 We've got t-shirts and mugs here!

The USMC/Combat Helicopter and Tiltrotor Association is a tax exempt organization under Internal revenue Code 501(c)(3). Donor contributions can be deducted under IRC Section 170