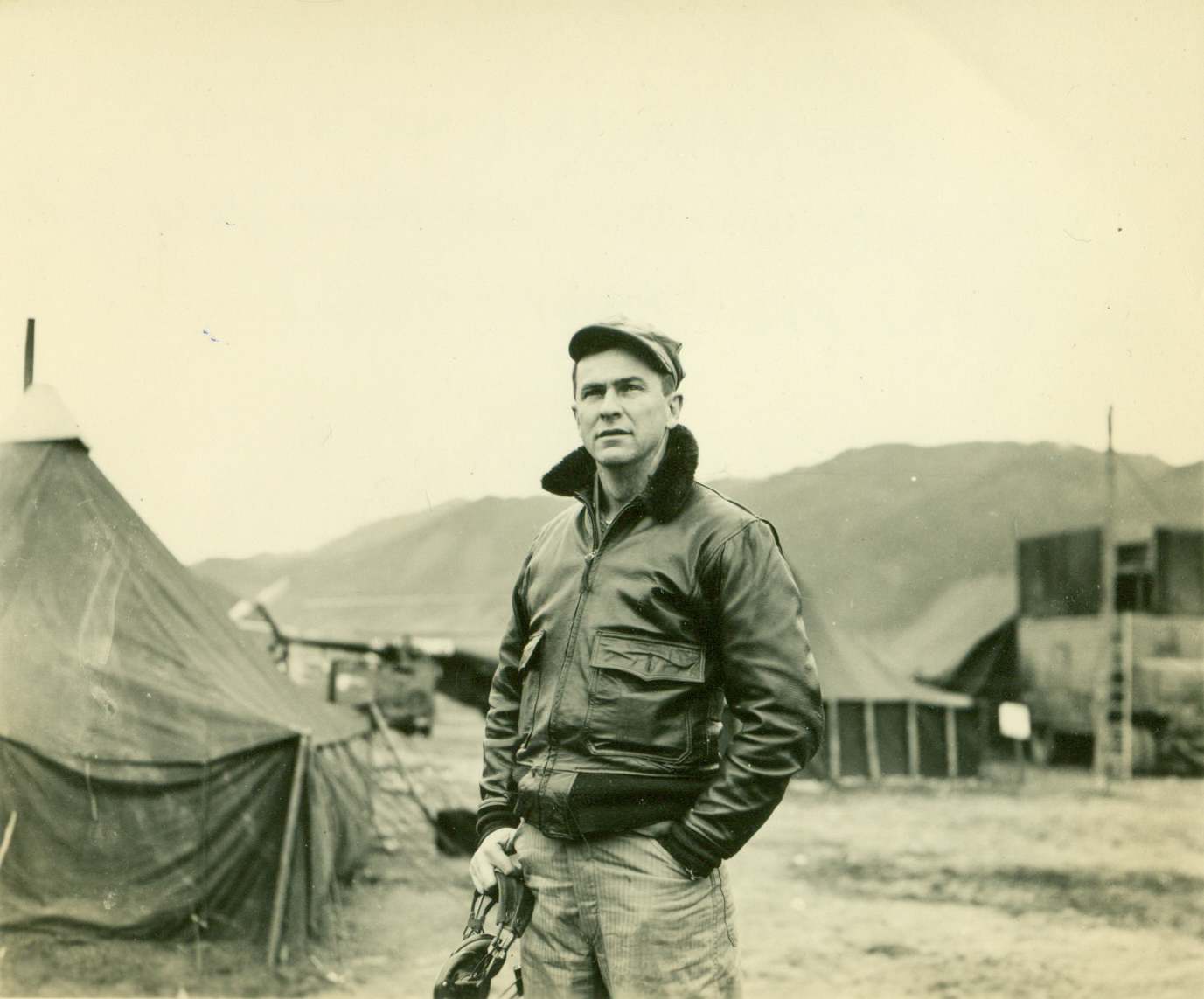 Michael McMahon served with HMR 161 in Korea from mid 1951 till late 1953. He was a combat photographer. 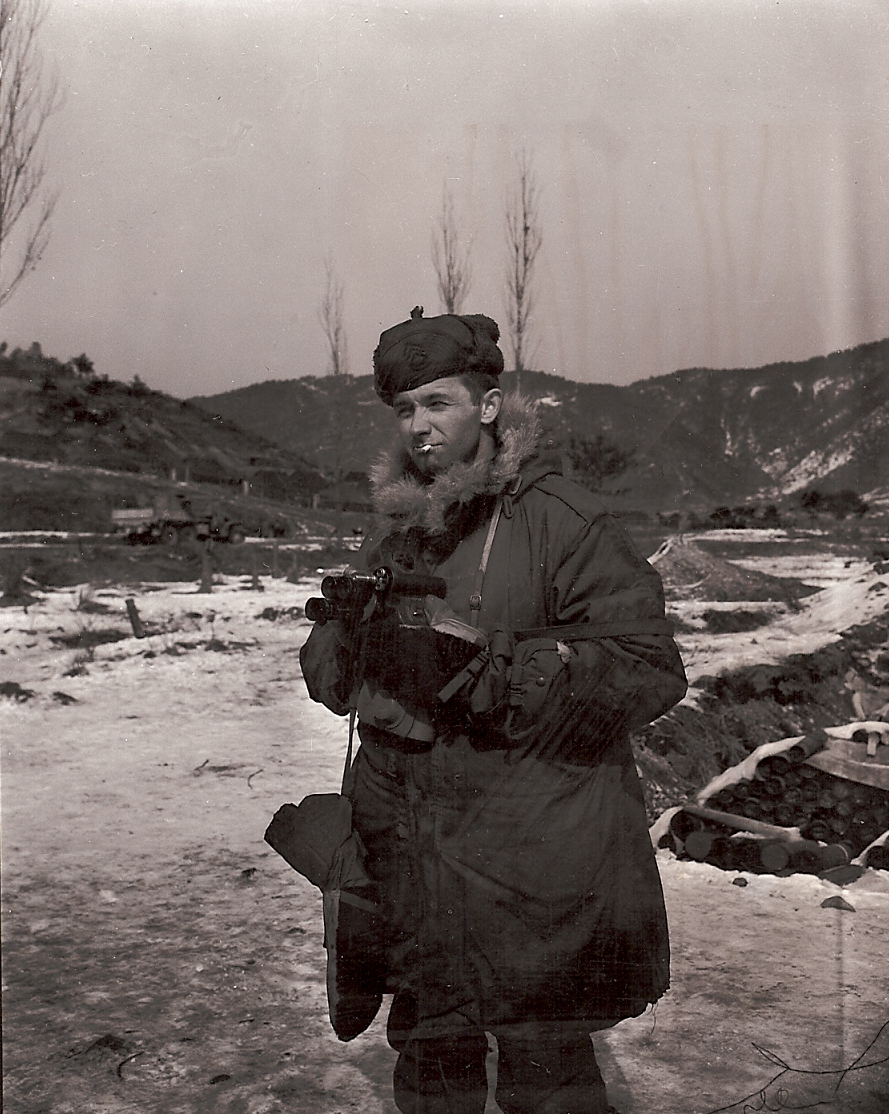 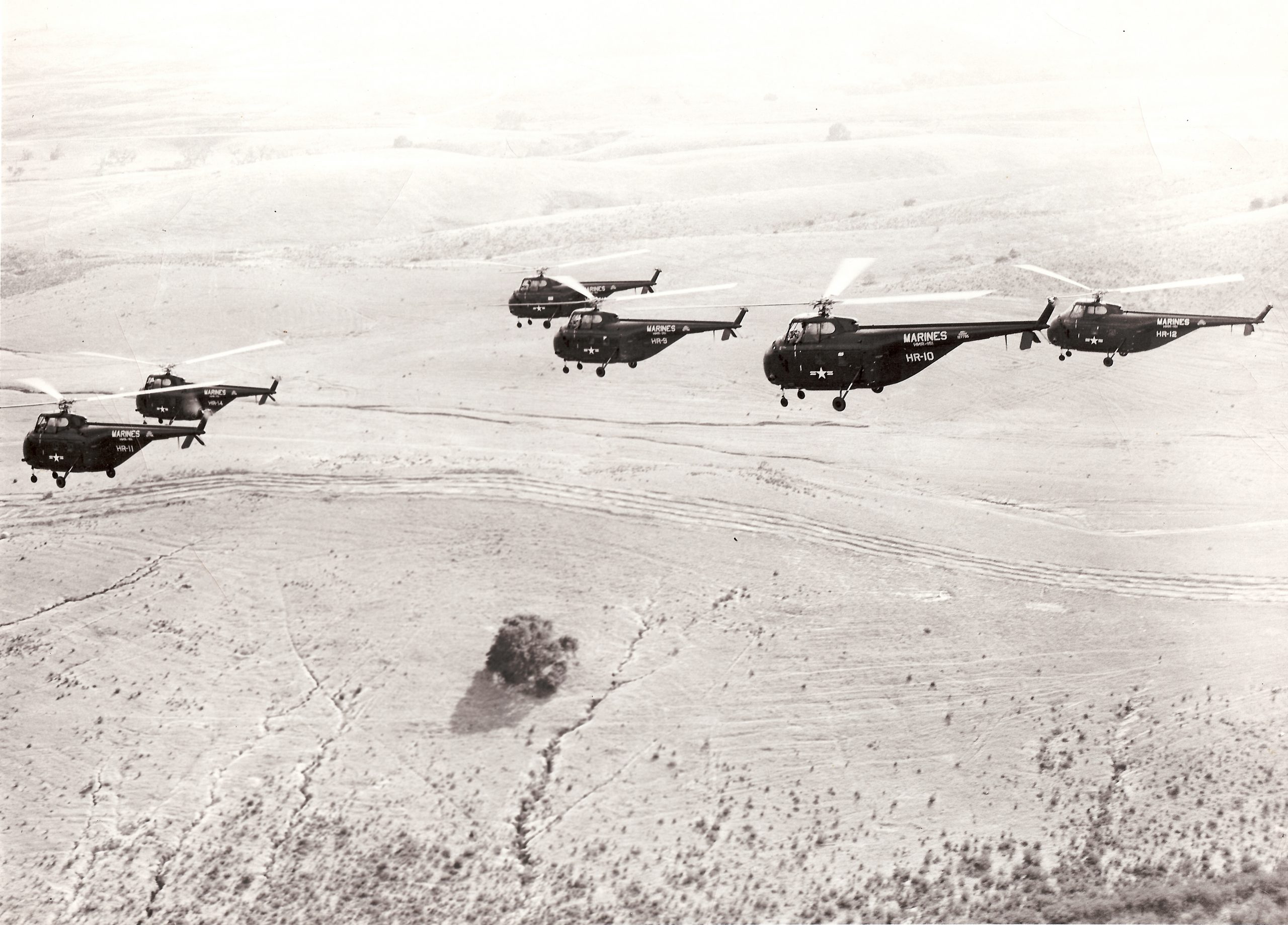 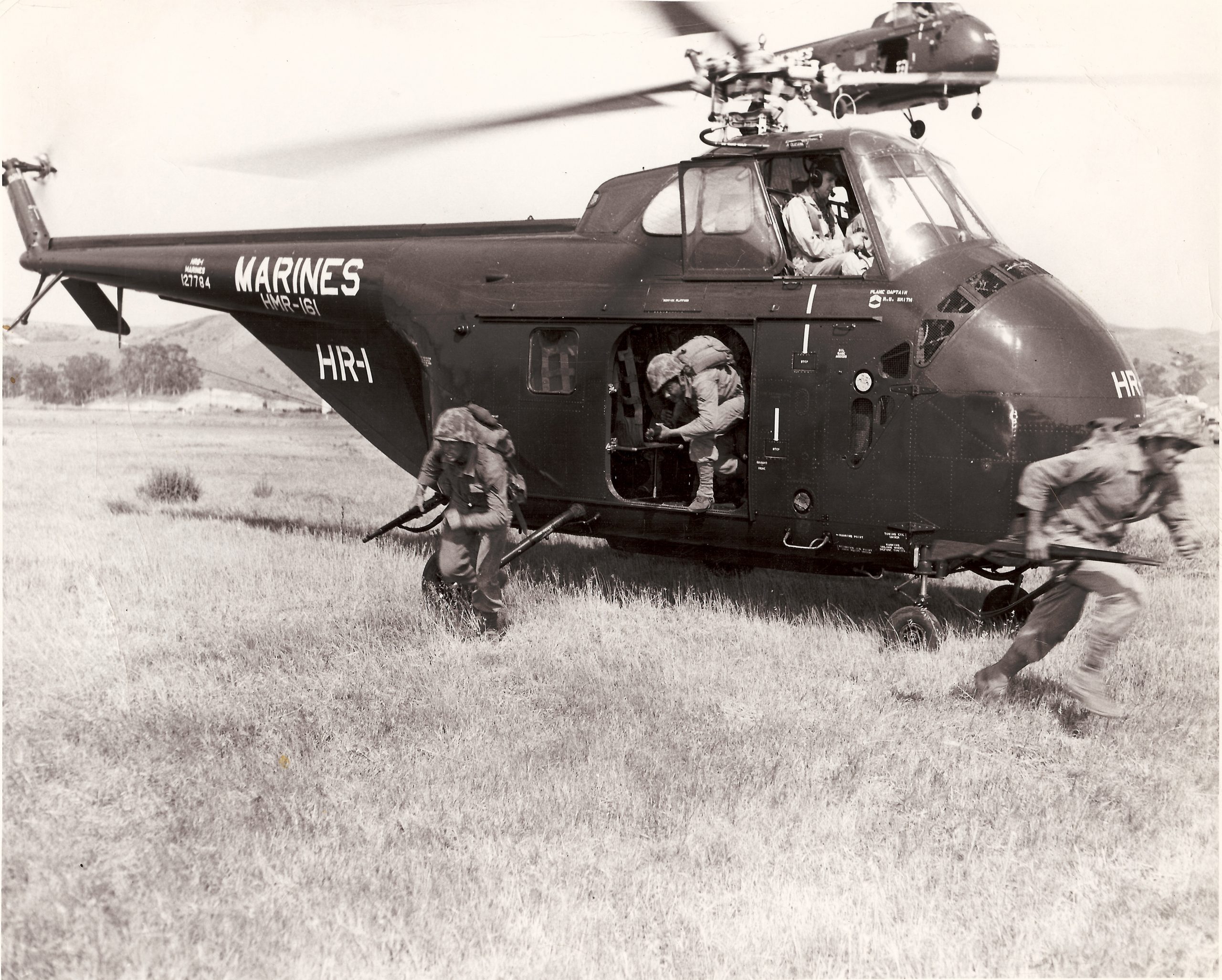 On July 18, 1951, nine helicopters from HMR-161 participated in a demonstration at Camp Pendleton for the purpose of introducing the press to the Marine Corps doctrine for using helicopters in modern warfare. The helicopters carried assault troops, 75mm howitzers on external slings, supplies, and simulated battle casualties. 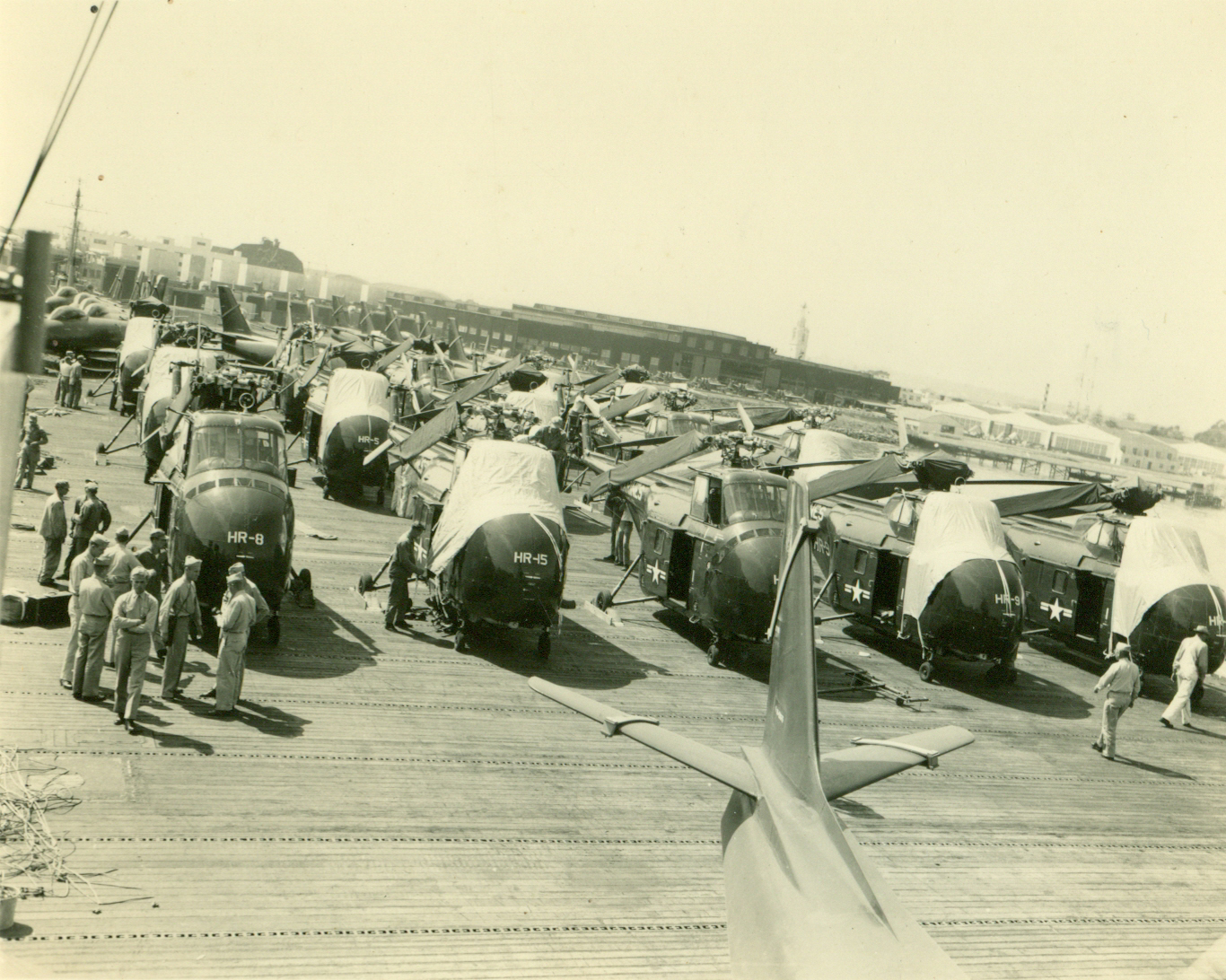 Sitkoh Bay prepares to sail for Korea from San Diego in August 1951 with an allotment of 15 brand-new HRS-1s tied down on its deck, decked out in gloss sea-blue and sporting tail codes from HR-1 through HR-15. 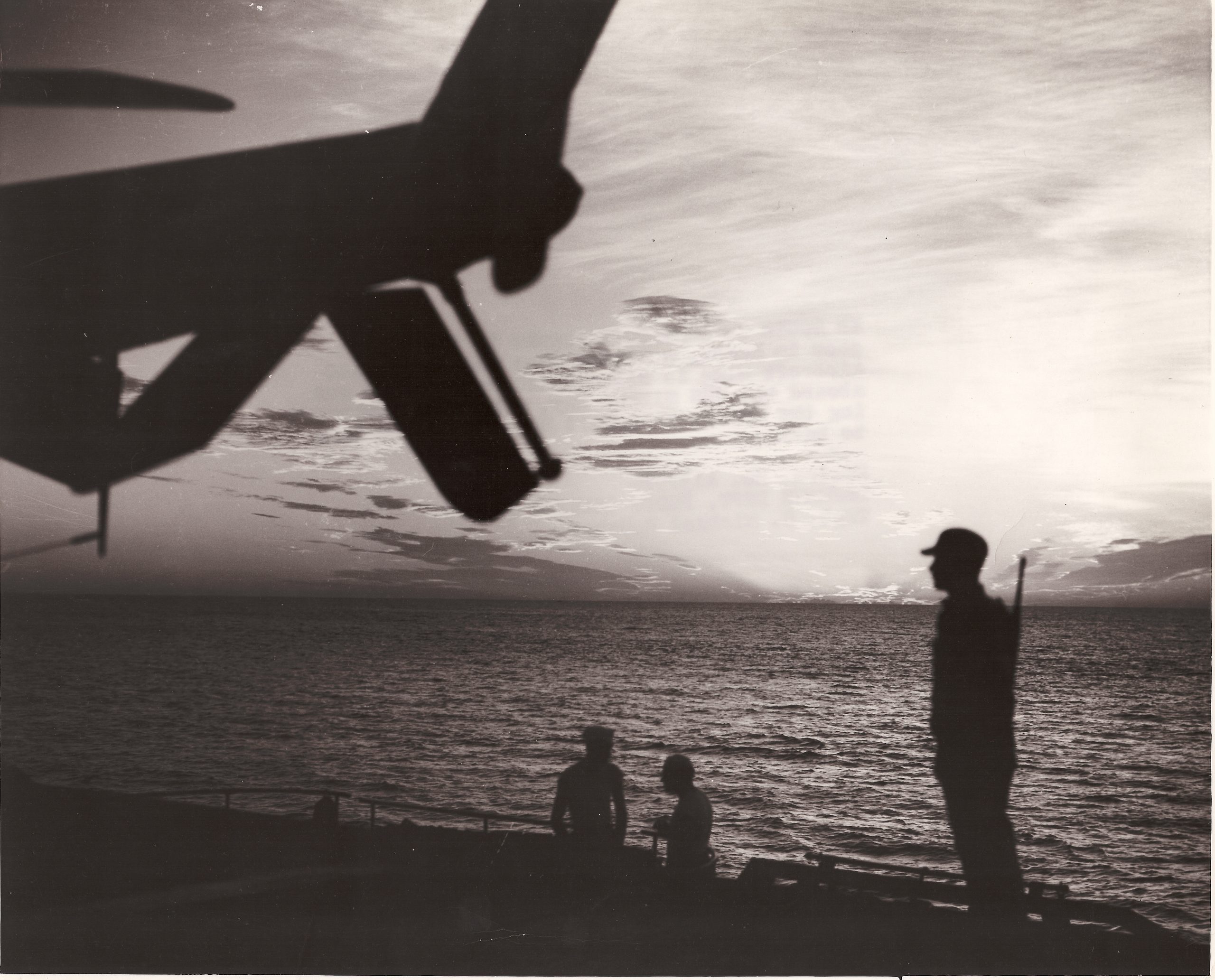 En route to the combat zone in Korea, a Marine from the 1st Marine Aircraft Wing is silhouetted by the dawn sun aboard the USS Sitkoh Bay, a carrier transporting the Marine transport helicopter squadron to battle.
Defense Dept. Photo (Marine Corps) A132514

The HRS-1 was an innovative new design, designated by Sikorsky as the S-55. By placing the radial engine in the nose, Sikorsky engineers not only solved the center-of-gravity issues of earlier designs,they also made it easier to maintain the helicopter. More important, the resulting interior space could be used to carry fully equipped combat troops or cargo.The opportunities literally opened up by this expanded space would soon be demonstrated by HMR-161. Marines had been experimenting with the concept of air assault and supply by helicopters since 1949. Now it could—and would—be put into wartime practice in dramatic fashion. 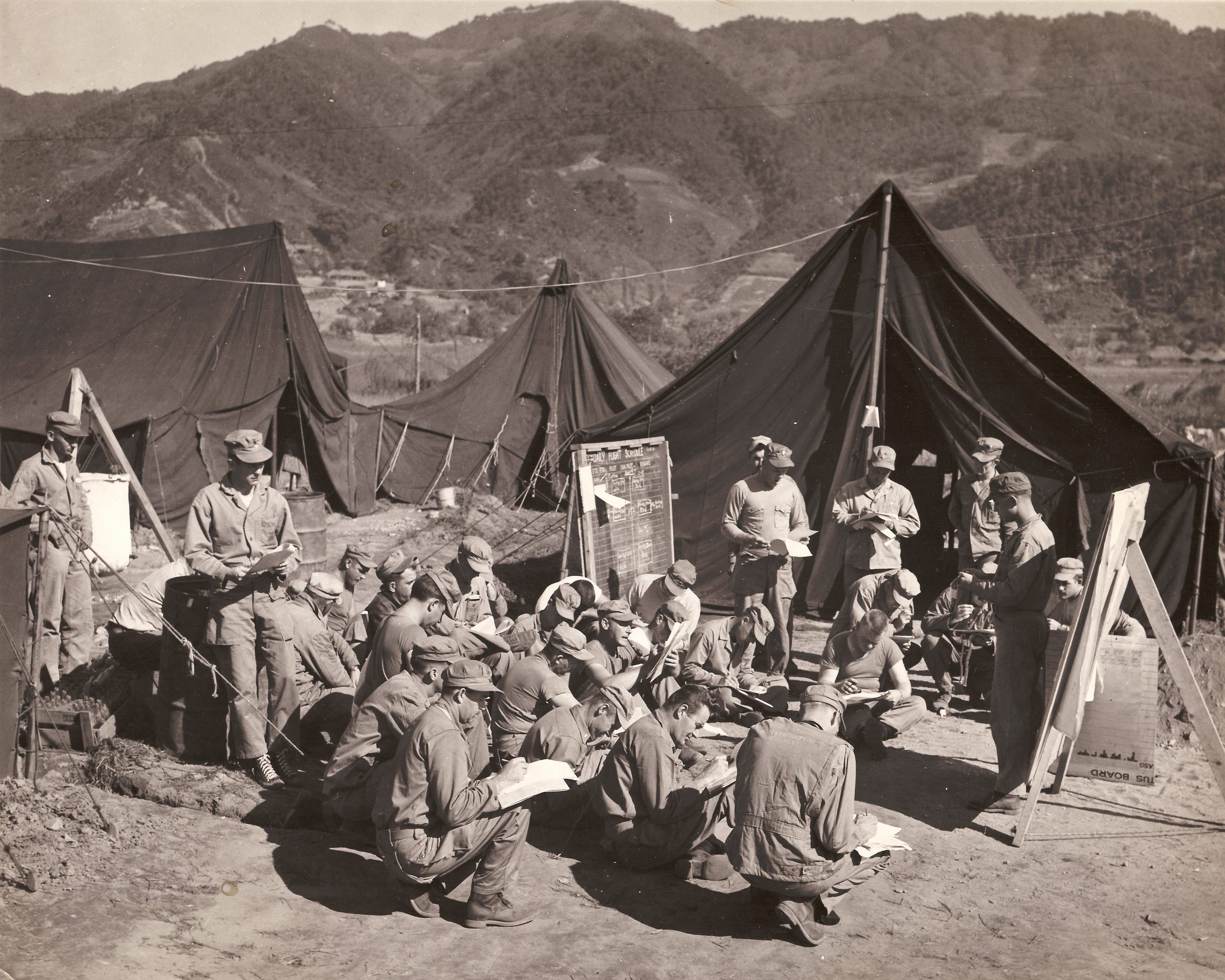 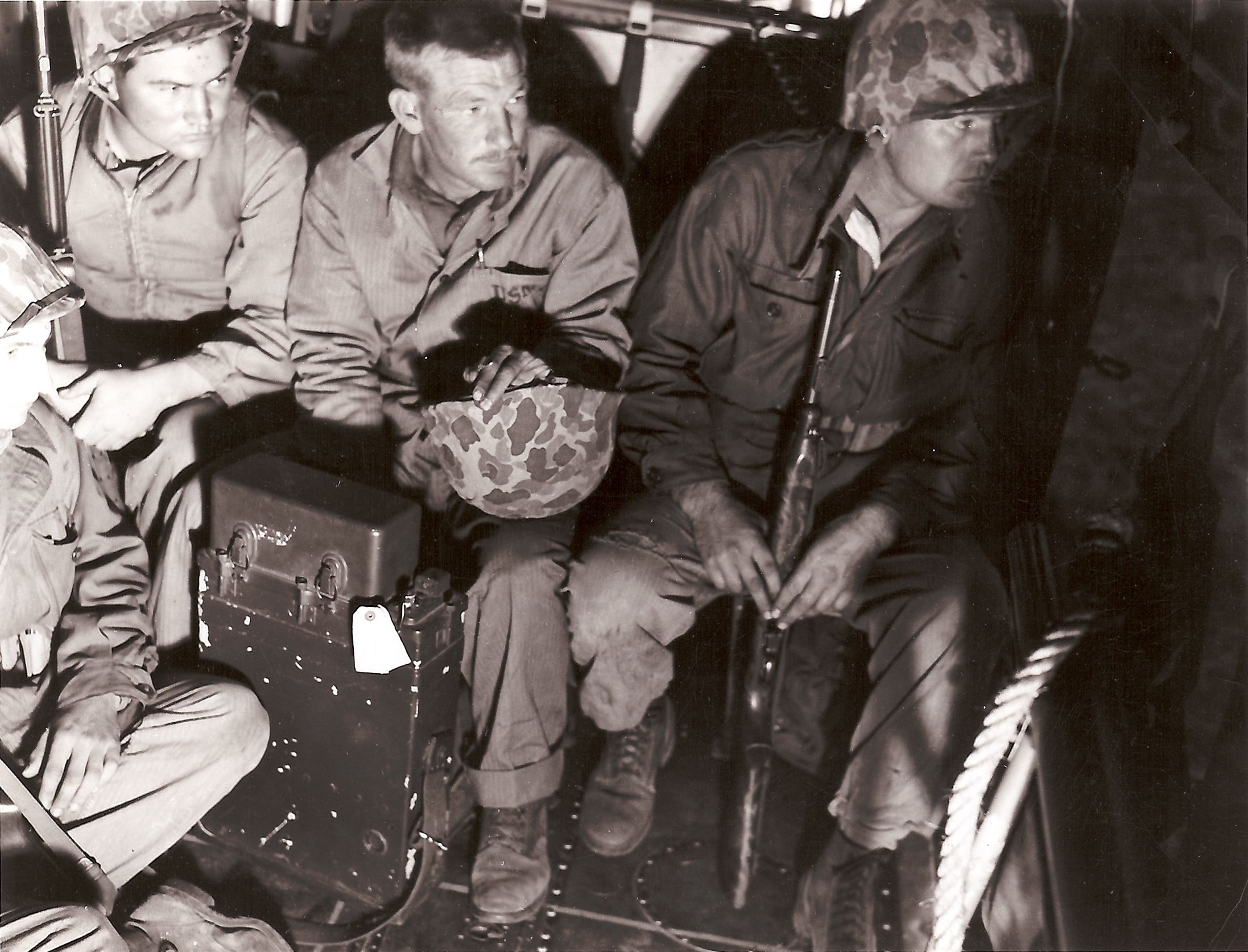 NIGHT OPERATION – Marines in the cabin of one of the 1st Marine Aircraft Wing’s giant 10-passenger transport helicopters are shown as they come in to land on a ridge for a reconnaissance patrol against Red forces in North Korea. Left to right are: Pfc Joseph Whitcomb; Pfc Ellis Morrow; Pfc Richard Creasman; and Pfc Chester Fuhrman. 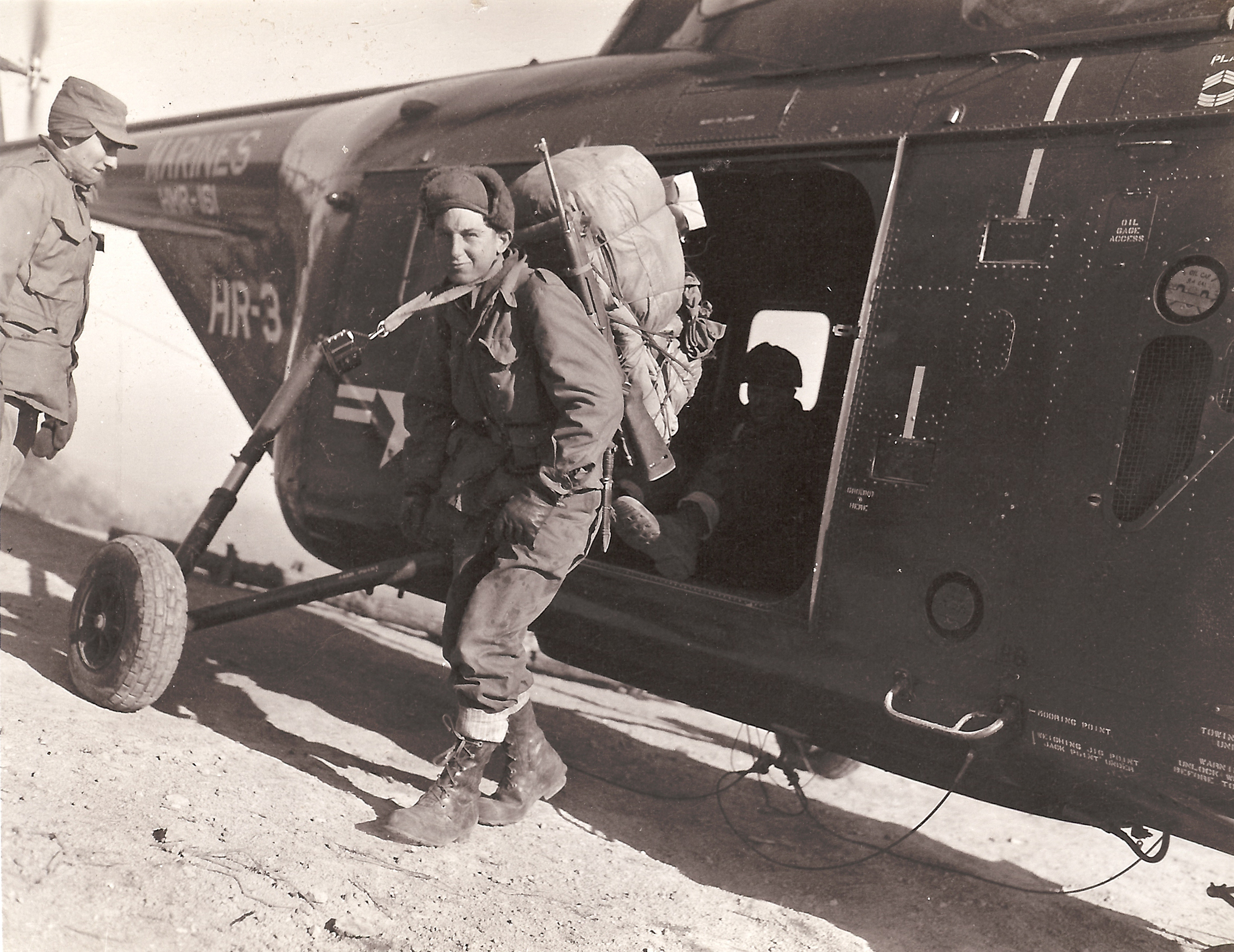 BEATS WALKING – After spending three weeks on front lines in Korea, this Marine is one of many given a lift to a rear area rest camp via a Marine transport helicopter. Instead of spending hours sliding down the steep Korean slopes with a heavy pack, Marines are whisked from front lines to rear area in a matter of minutes. 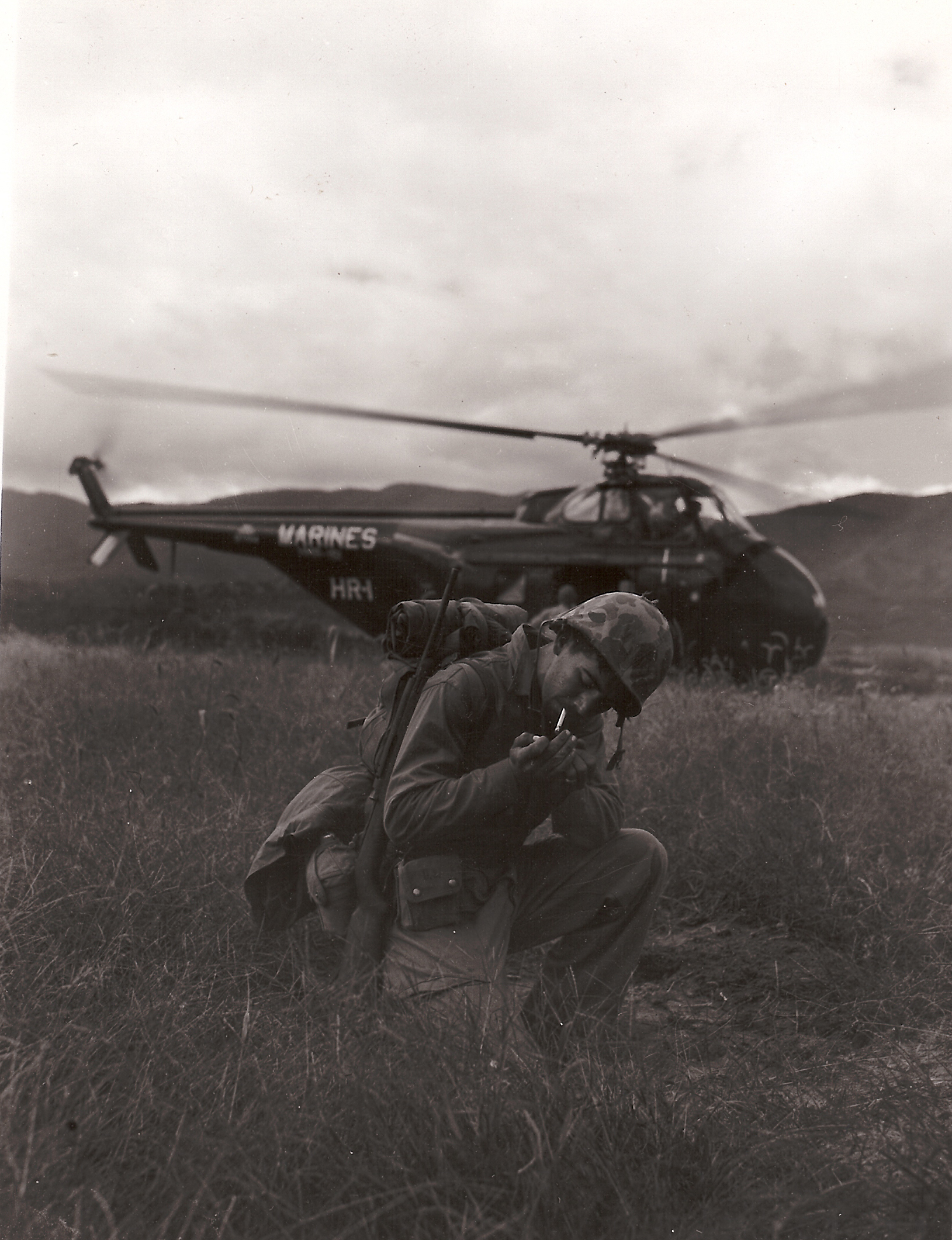 Lighting Up For Luck

Private First Class Herbert J. Martin of St. Louis, MO., a forward observer with the 1st Marine Division takes time out during a troop drop in the “Punch Bowl” sector in Central Korea as Marine units are dropped in a surprise move against the Reds. In the background is another 1st Marine Air Wing helicopter carrying a load of assault troops. The mission was accomplished at dusk.
Defense Dept. Photo (Marine Coprs) # A- 132081 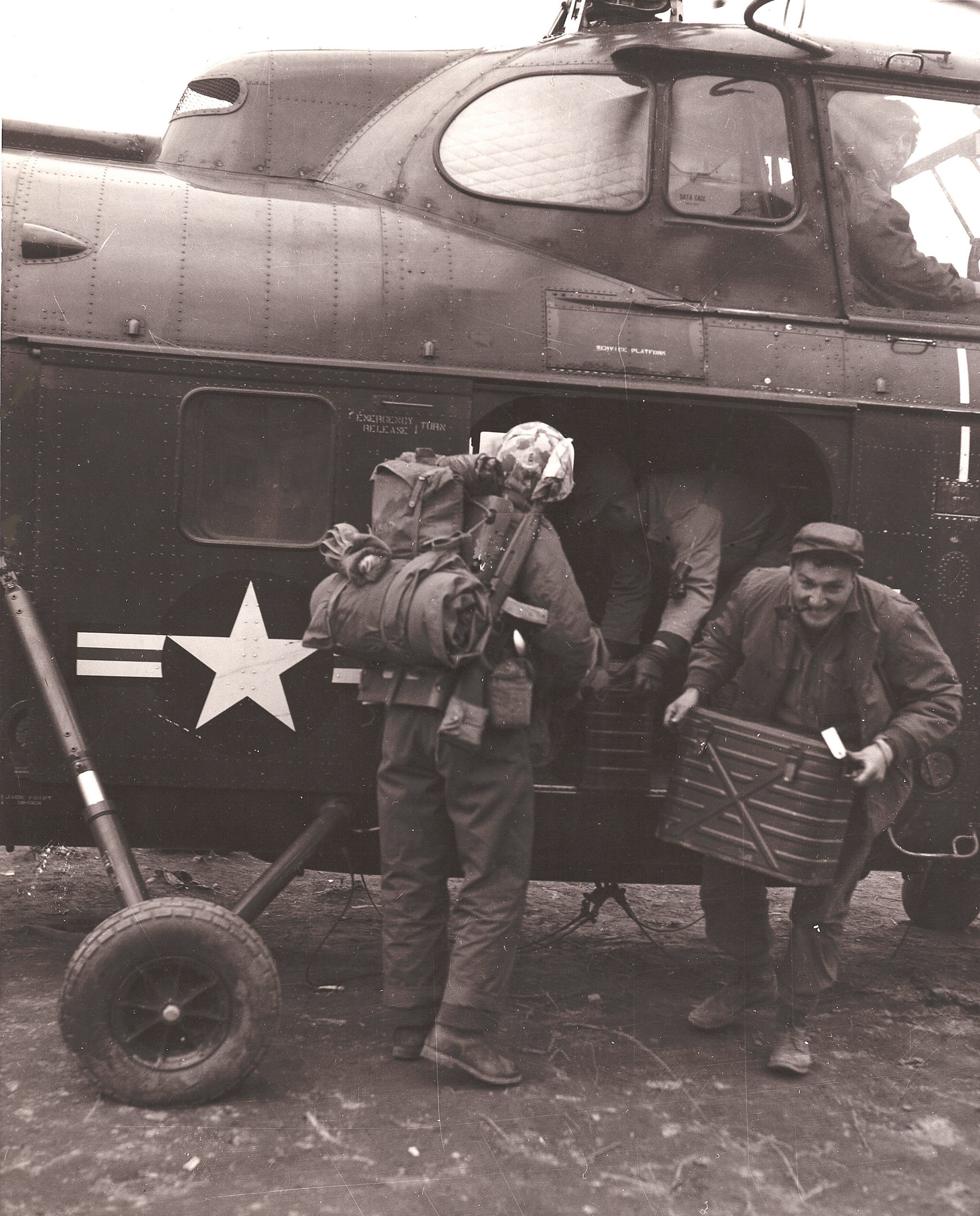 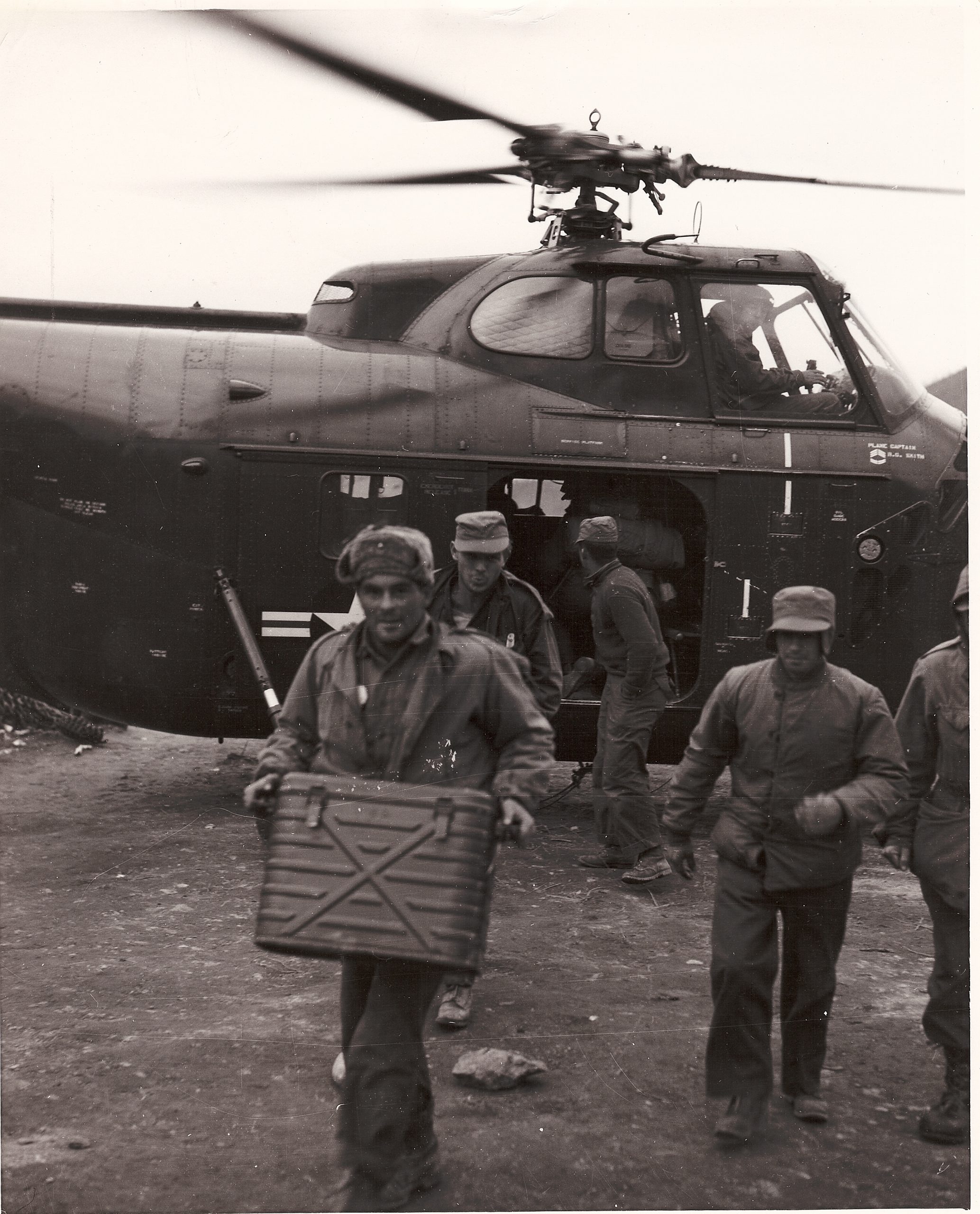 Marine Master Sergeant Charles E. O’Rourke carries a container of hot Thanksgiving dinners from a Marine transport helicopter that delivered the holiday meal to all Leathernecks on the Korean front.
Defense Dept. Photo (Marine Corps) A-132348 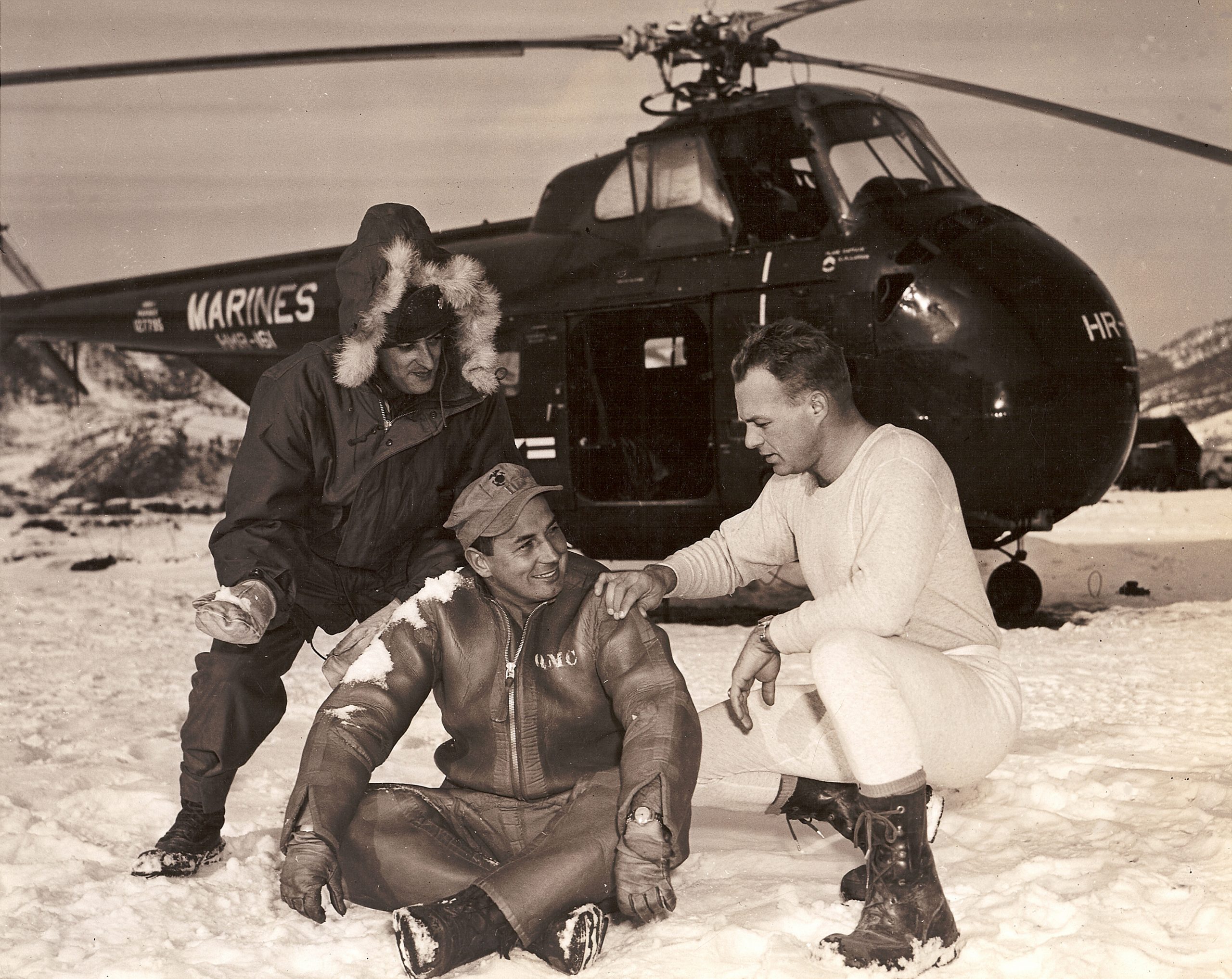 The Marine pilots of HMR-161 are testing a new type of cold weather skin in Korea which allows the wearer to use a regular work uniform minus the added weight of present cold weather clothing. The new longies are of a foam type rubber and weigh only a fifth as much as the present gear. Pictured left to right are Major Victor J. Layton, designer of the skin; Capt. Gaylord Guthneckt who is wearing the skin as part of the experiment; and Lt. Frederick Adams in the old style long underwear. 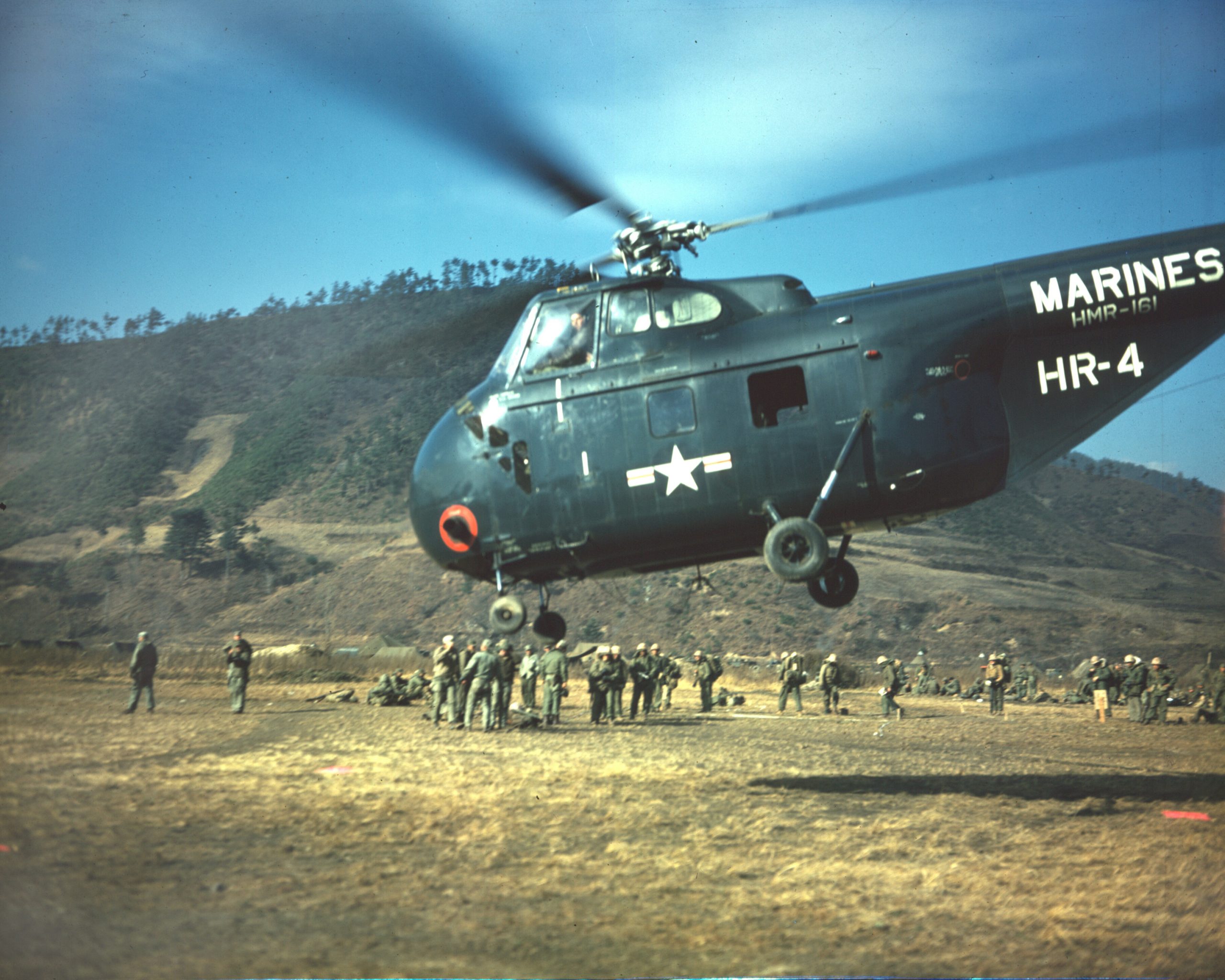 Arriving in Pusan Harbor on September 2, the squadron’s 43 officers and 244 enlisted men quickly settled in at what would be their home base, auxiliary field X-83 near Chondo-ri.

On September 13, HMR-161 conducted operation Windmill I, history’s first mass helicopter resupply mission, lifting an impressive 18,848 pounds of combat gear seven miles to a Marine battalion on the front lines and evacuating 74 casualties. Amazingly, the squadron accomplished all that work within just one hour 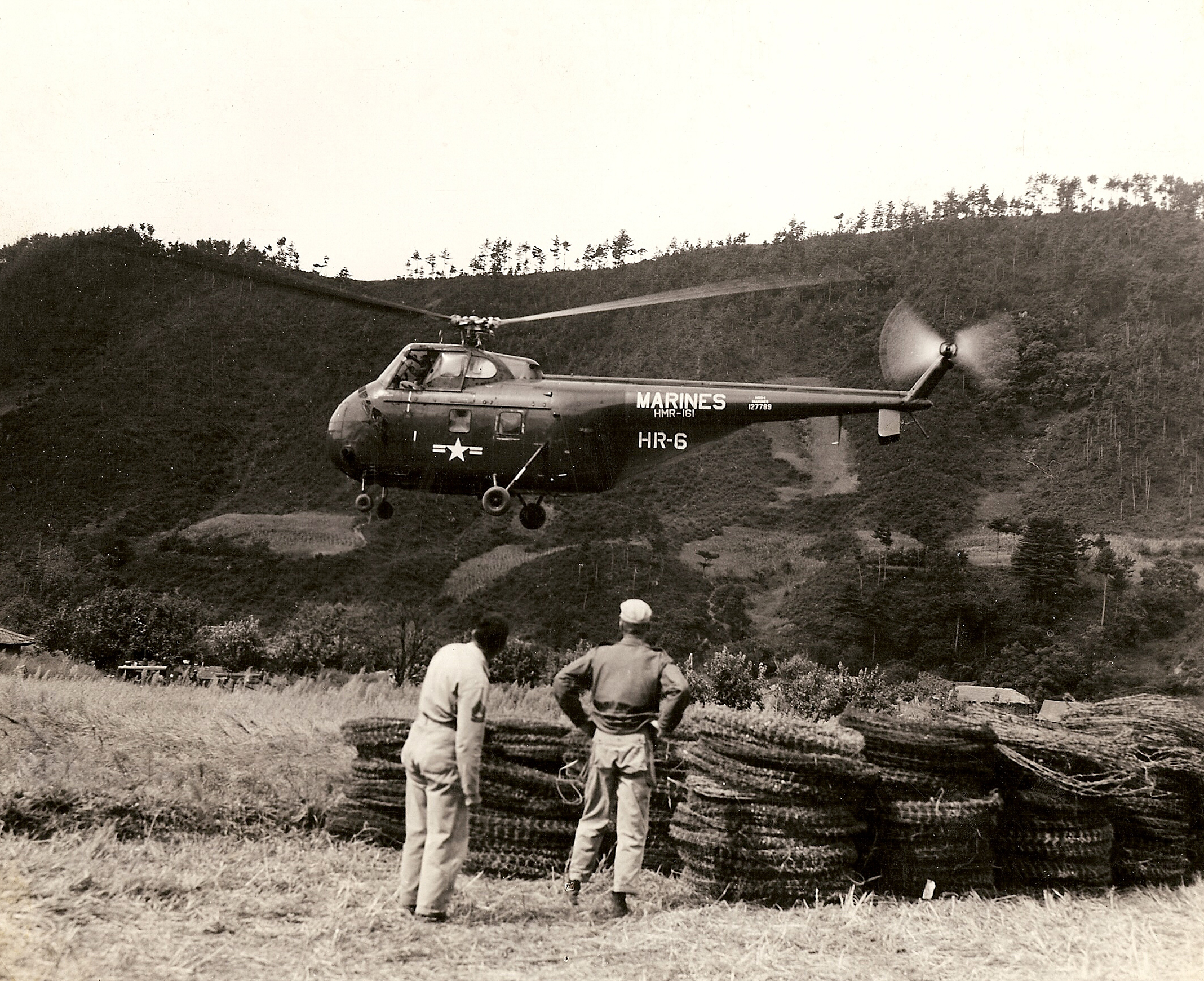 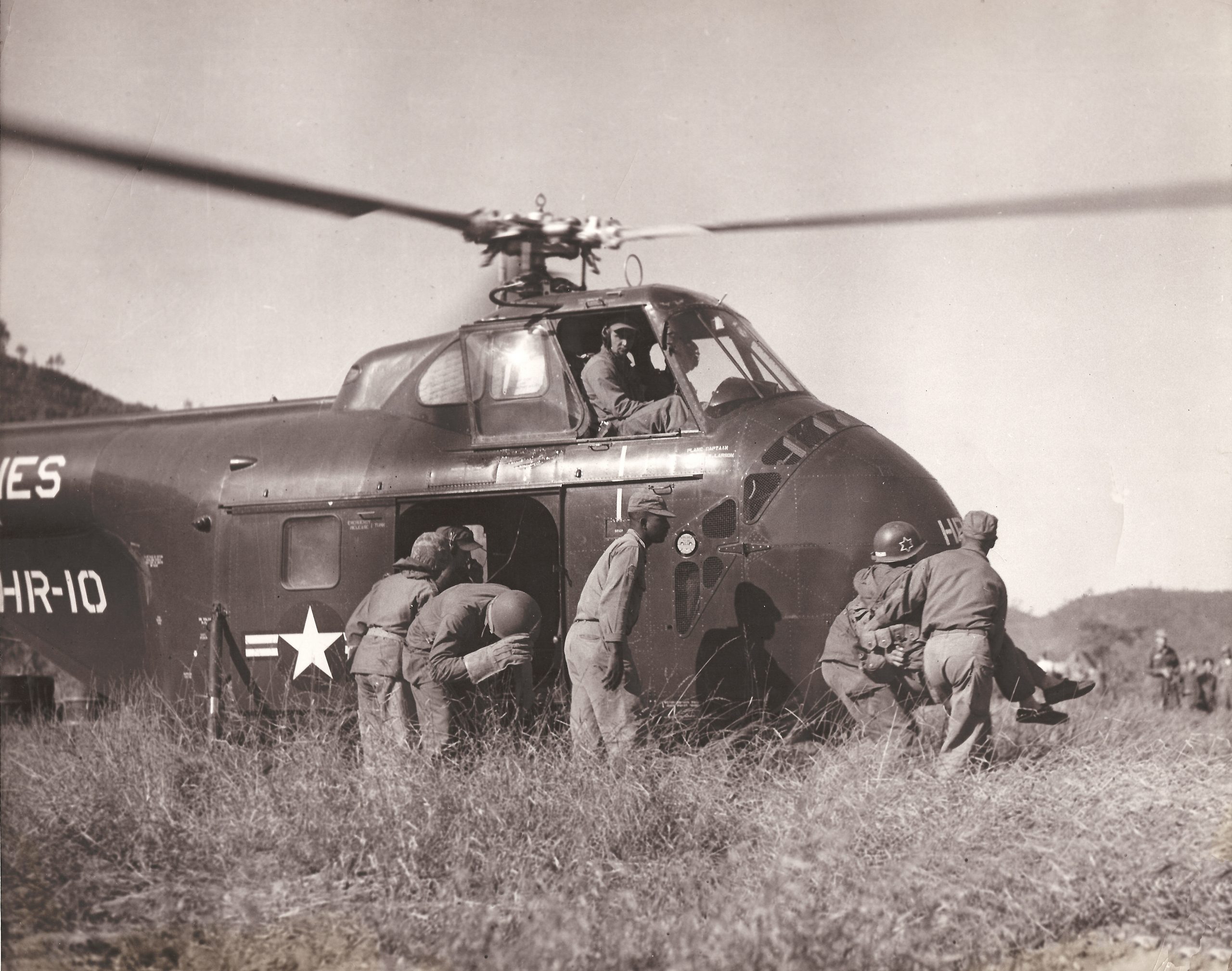 HELP FOR ROK TROOPS – A Marine helicopter prepares to evacuate the wounded of a cut-off Republic of Korea Army unit near Inje. 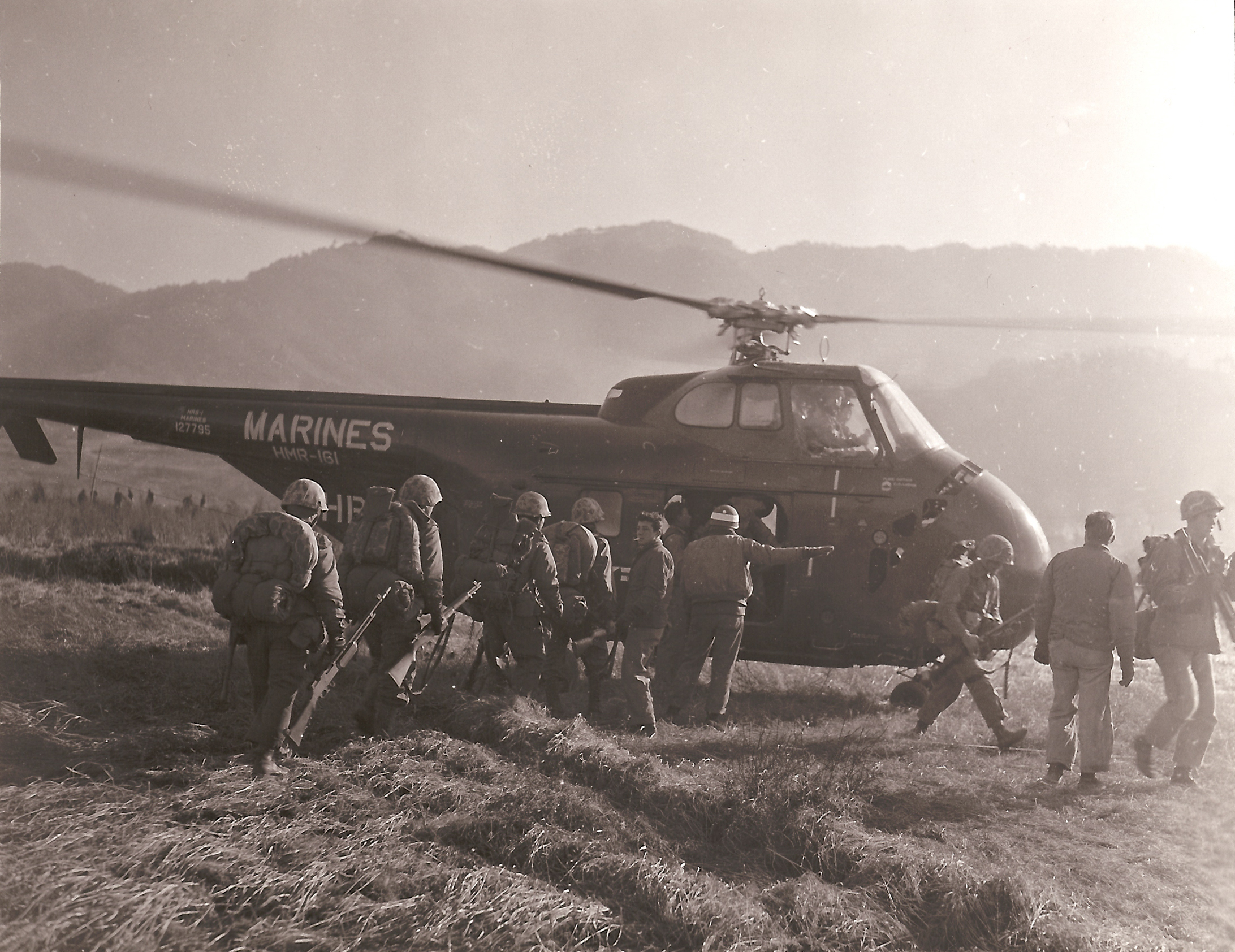 A 1st Marine Aircraft Wing transport helicopter takes out a fresh load of replacements for the 1st Marine Division at an advance base in Korea. The tropp drop was into the front lines, while Marine Corsair fighter-bombers furnished air support to keep enemy guns quiet on a nearby hill position.
Defense Dept. Photo (Marine Corps) # A132632 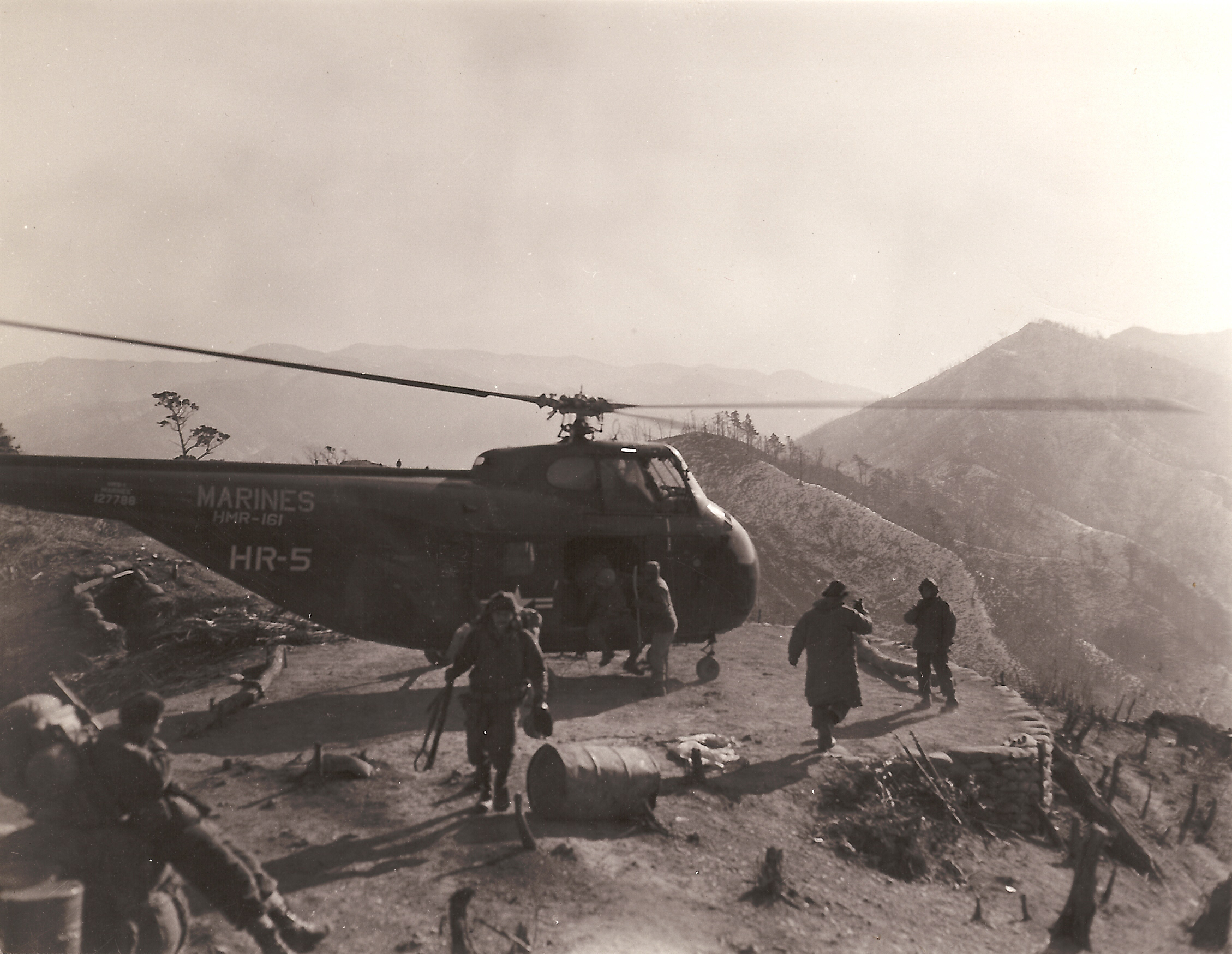 Marines who have slogged and fought for the razorbacked ridges in North Korea have been given a real “lift” since Marine helicopters have been assigned to the First Division. All Marines rotated to and from front lines and rear area rest camps are airlifted by the transport helicopters.
Defense Dept Photo(Marine Corps) # A-159272 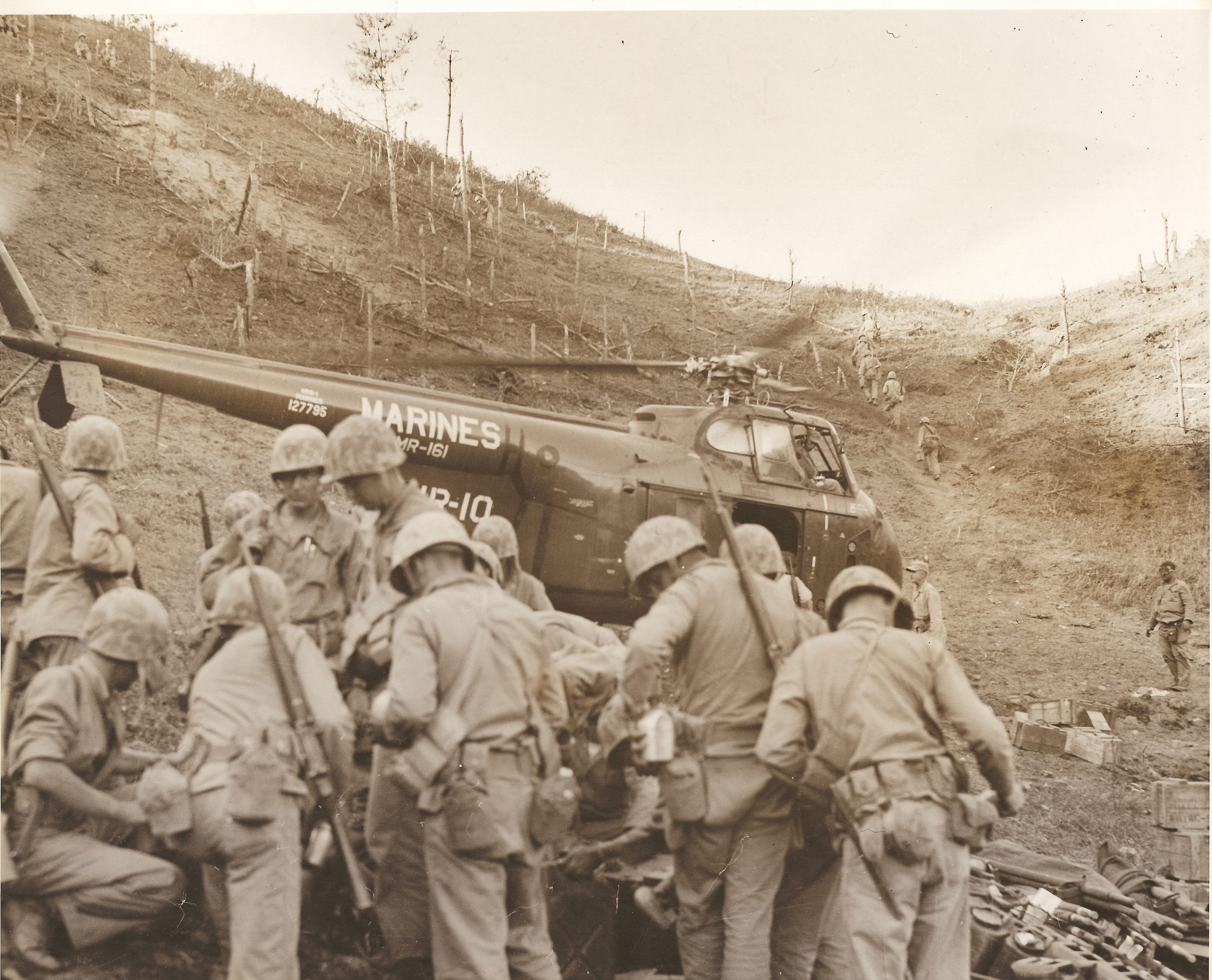 On September 13, 1951, HMR-161 conducted the first mass helicopter resupply in history. Known as ‘Windmill I,’ the operation involved airlifting one day’s supply to the 2d battalion, 1st Marines which was attacking on Hill 673 northward along a ridge system. The supplies were loaded at field X-83 and carried 7 miles where they were unloaded at a site near the battalion. 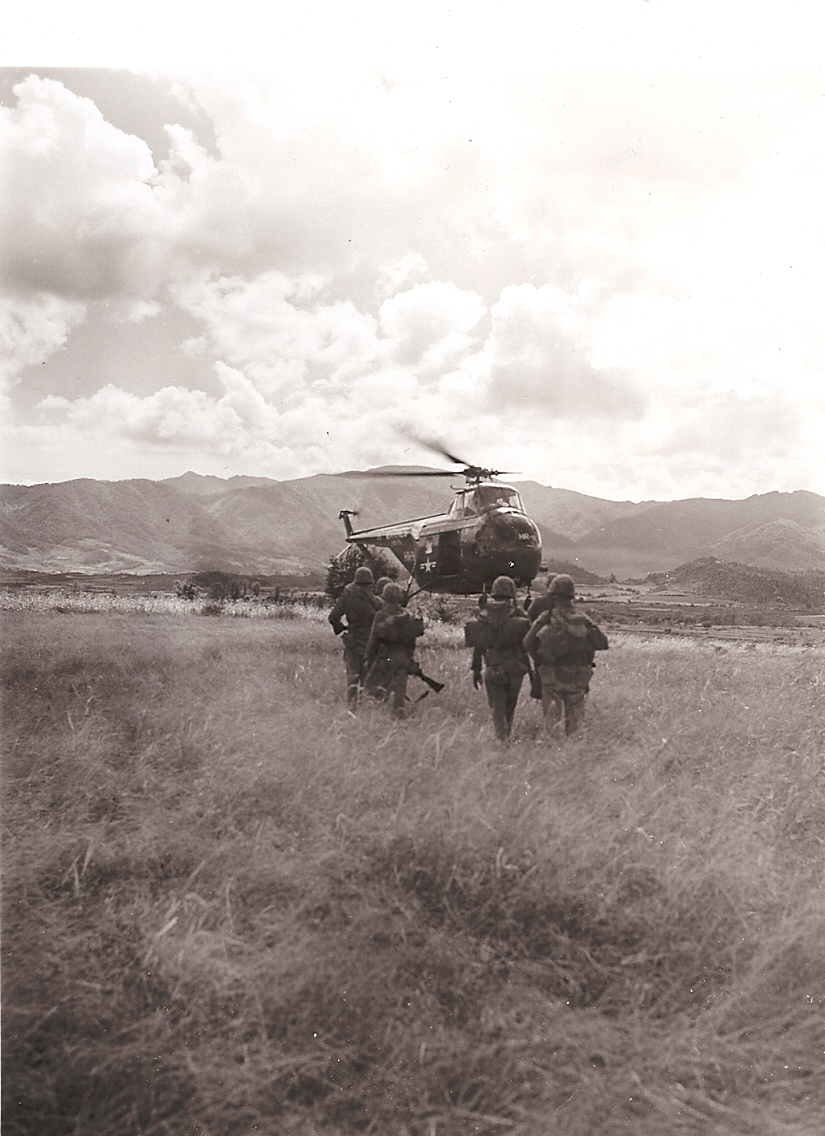 Marines awaiting to transfer to another area, move toward a giant 10-passenger Sikorsky helicopter in East Central Korea as the machine hovers above tall grass. 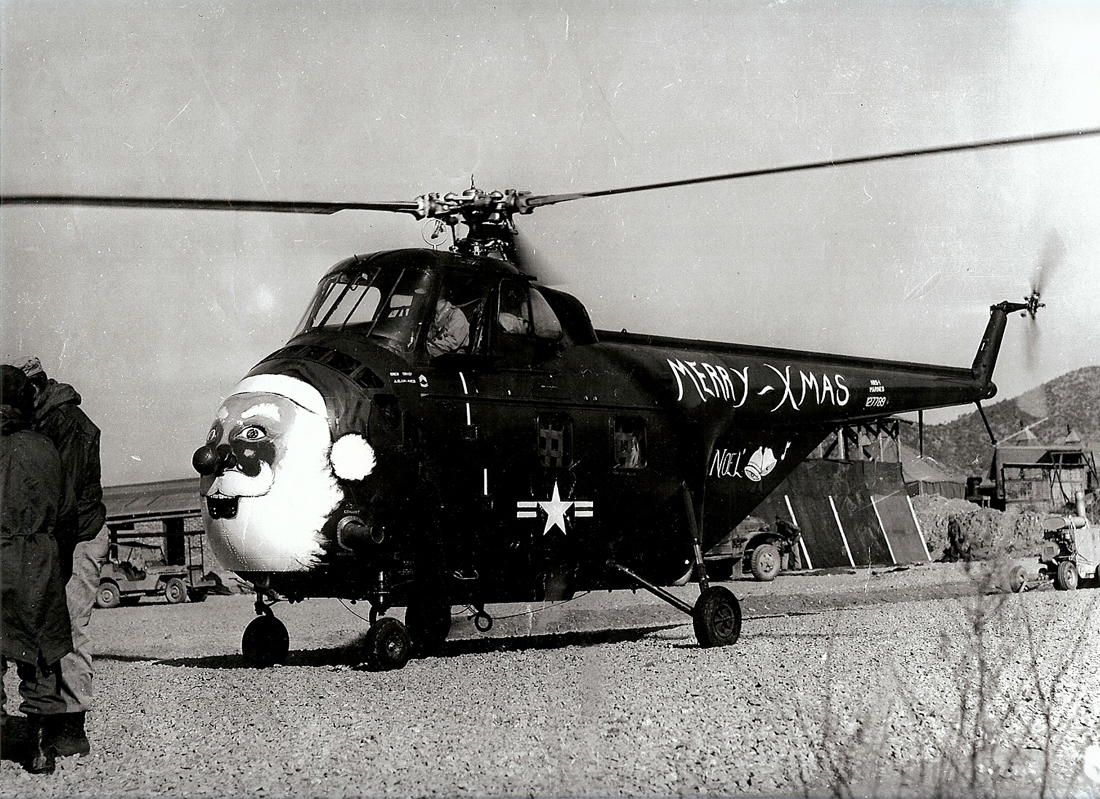 “HR-69” assembled from parts of HR-6 and HR-9,sets out on its Christmas mission in 1952. A volleyball served as Santa’s nose.

Mike McMahon (Mike’s son) would be interested in hearing from anyone that remembers his Dad. Contact Mike